“Eric Bibb, Wanda Jackson, and Tom Paley have been among those fortunate enough to have Deivert’s playing grace their music, and on Blood In My Eyes For You it is clear why he is regarded as one of the world’s foremost blues mandolinists.”  –  fRoots magazine, UK 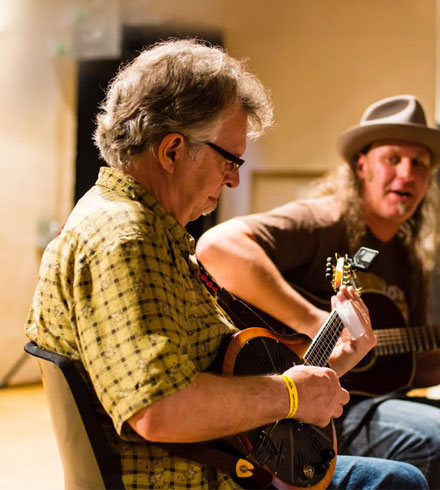 From playing in the streets of San Francisco in the early 1970’s to recording an award-winning album in Thailand in the 2010’s, American Bert Deivert is forging new ground with his interpretations of vintage blues and roots material on mandolin and guitar. He is one of the few recording blues mandolin artists of today, drawing chiefly on the traditions of Yank Rachell and Carl Martin. His playing and distinctive vocals are easily recognizable and he charms audiences with his stories backed by expertly played guitar and mandolin. His music garners rave reviews in press all over the world. He is an award-winning songwriter and has toured in 24 countries during his 47 year career. Worked with: Peter Case, Eric Bibb, Wanda Jackson, Memphis Gold, Charlie Musselwhite, Sven Zetterberg, T-Model Ford, Sam Carr, and Cadillac John Nolden, among others

Some things other Musicians have to say...

“I always look forward to hearing Bert Deivert’s music because, like me, he loves the old style blues and he always does a great and faithful job of presenting it. Big thanks to Bert for keeping his music alive and doing it so well.” – Charlie Musselwhite, blues harmonica Grammy winner

“I spent a whole weekend at the Juke Joint Fest (Clarksdale, MS) and I didn’t hear hill country music as good as this. Awesome! A great mix of grooves. You gonna get ‘em up and dancing with this one! And I love the little tastes of Yank that you throw in, sometimes mixed with Far Eastern melody bites. Love it!”  – Rich DelGrosso, blues mandolin maestro and writer

“Bert Deivert and I played blues on the streets of San Francisco throughout 1973 and 1974. One of our big numbers was Sleepy John Estes’ Broke and Hungry. I can vouch for his experience! We both stuck to the grind, and here we are in a new century, still rockin’ it. He’s one of of my favorite people and musicians. “  – Peter Case, (Plimsouls) Grammy nominated producer and songwriter